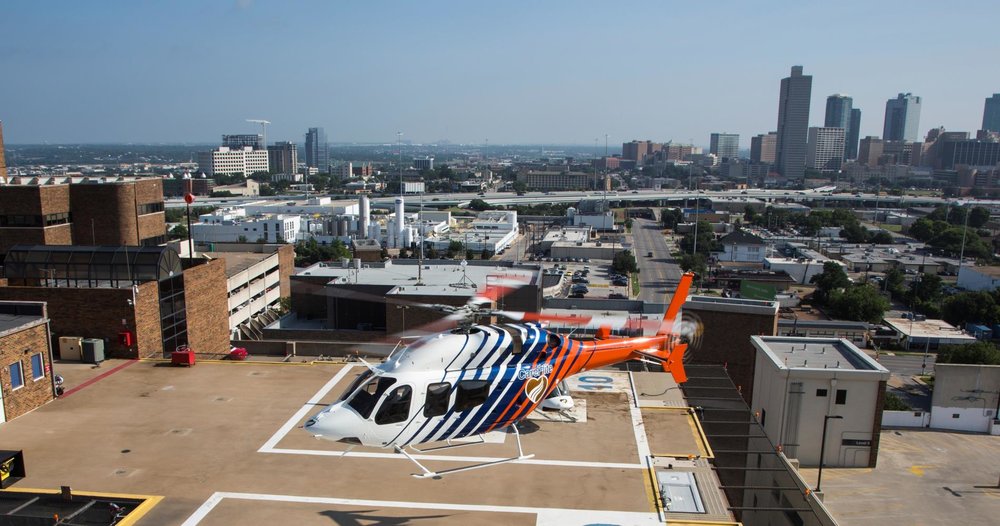 For critically ill or injured patients needing urgent care fast, every second is a race against time. But transportation to the hospital by helicopter is linked to a 1.5 percent increased survival rate compared with ground transportation, according to a 2012 study published by the Journal of the American Medical Association. For some this number may seem small, but for Texas nonprofit CareFlite, every patient taken by helicopter is another chance at saving a life.

In 1979, CareFlite was established by two hospitals in the DFW Metroplex. Its air medical program of nurses, paramedics and pilots initially transported about 20 patients each month. It was the first step in offering helicopter medical services throughout the North Texas with crews trained in a variety of areas, including trauma, cardiac, neonatal, obstetrics, pediatrics, and burn care, as well as lab proficiency skills. Later, CareFlite began operating a ground ambulance division in Dallas in 1980 to support its helicopter service. Since its founding, CareFlite has transported 939,997 patients by air and ground as of 12/31/16. It is the nation’s oldest joint use air medical program. CareFlite, a 501c3 not for profit, is sponsored by Baylor Scott and White Health, JPS Health Network, Methodist Health System, Parkland Health and Hospital and Texas Health Resources. Recognized for the safety and quality of its operations, programs from Australia, China, India, Ireland, to name a few counties, have visited CareFlite to study its methods of operation.

Bell Helicopter has had the pleasure of serving as its main helicopter manufacturer from the start.

What began as a grassroots effort with one helicopter sponsored by two hospitals has today grown into an impressive fleet that includes two Bell 429s, four Bell 407GXs and one Bell 407GXP serving patients in North Texas and Southern Oklahoma. All the helicopters in CareFlite’s fleet are also enrolled in Bell Helicopter’s Customer Advantage Plan, providing the support needed throughout the lifecycle of their aircraft, from maintenance to lifesaving mission requirements. James C. Swartz, President and CEO at CareFlite, says as the company has continued to grow over the years, so has Bell Helicopter right alongside it:

Thinking above and beyond is what we do. For more than 85 years, we’ve been reimagining the experience of flight – and where it can take us.

We are pioneers. We were the first to break the sound barrier and to certify a commercial helicopter. We were a part of NASA’s first lunar mission and brought advanced tiltrotor systems to market. Today, we’re defining the future of advanced air mobility.

Headquartered in Fort Worth, Texas – as a wholly-owned subsidiary of Textron Inc., – we have strategic locations around the globe. And with nearly one quarter of our workforce having served, helping our military achieve their missions is a passion of ours.

Above all, our breakthrough innovations deliver exceptional experiences to our customers. Efficiently. Reliably. And always, with safety at the forefront.

Textron Inc. is a multi-industry company that leverages its global network of aircraft, defense, industrial and finance businesses to provide customers with innovative solutions and services. Textron is known around the world for its powerful brands such as Bell, Cessna, Beechcraft, Pipistrel, Jacobsen, Kautex, Lycoming, E-Z-GO, Arctic Cat, and Textron Systems. For more information, visit: www.textron.com.

Certain statements in this press release are forward-looking statements which may project revenues or describe strategies, goals, outlook or other non-historical matters; these statements speak only as of the date on which they are made, and we undertake no obligation to update or revise any forward-looking statements. These statements are subject to known and unknown risks, uncertainties, and other factors that may cause our actual results to differ materially from those expressed or implied by such forward-looking statements, including, but not limited to, changes in aircraft delivery schedules or cancellations or deferrals of orders; our ability to keep pace with our competitors in the introduction of new products and upgrades with features and technologies desired by our customers; changes in government regulations or policies on the export and import of our products; volatility in the global economy or changes in worldwide political conditions that adversely impact demand for our products; volatility in interest rates or foreign exchange rates; and risks related to our international business, including establishing and maintaining facilities in locations around the world and relying on joint venture partners, subcontractors, suppliers, representatives, consultants and other business partners in connection with international business, including in emerging market countries.